Hello, my name is Victor Chien and I am a rising Senior attending Wilcox High School. I chose to attend this program because I believe it will offer me significant insight into the construction of complex circuitry and various CAD programs. I also want an in depth understanding of Microsoft Kinect’s 3D imaging/detection system and how I can apply this technology to robotics. My starter project is the Digital Name tag, which displays my name in several different intriguing light patterns (Name Tag). My main project, the Kinectobot, is a three wheeled robot controlled by a Microsoft Kinect sensor. I plan to use the Kinect’s point cloud technology to navigate the robot autonomously through difficult terrains. I also plan to use the Kinect’s body tracking technology to control the robot with my arms and hands.

Looking back at all I accomplished over these six weeks, I feels that I was able to gain a much deeper understanding of the role computers and various circuits play in a robot. I have some programming and mechanical experience, but very little electrical engineering exposure. Through my project, I explored many different aspects of electrical engineering. In order to safely power each of the circuits, I had to understand the importance of different voltage levels. Prior to this program, I foolishly thought I could use any battery to power a given electrical component. I was wrong. After burning out a raspberry pi and some motor controllers with a 12V battery pack, I came to realize the hard truth. In addition to understanding how delicate electrical components can be, I also learned to identify the different components on the circuits I used, such as regulators, potentiometers, jumpers, and capacitors. I had to fully understand how each part contributed to the functionality of the circuit as a whole in order to safely incorporate the circuit into the robot. Finally, I got the privilege to work with a raspberry pi computer and OpenCV. Learning these two things will be especially useful for my own engineering projects in the future.

For my next steps, I will continue hacking the Kinect sensor. I have so far gotten the imaging system set up on the Kinect using OpenCV and the Open Kinect Library. Setting up and implementing the Kinect point cloud and body tracking systems will be a long processes in themselves, but I will continue experimenting with it in order to explore 3D imaging technology in the field of robotics. 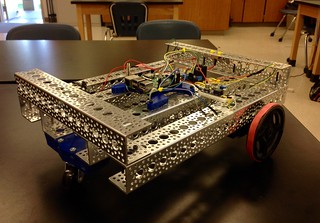 I faced a number of difficult problems when working on my second milestone. The first problems I faced were a result of my mistakes. I accidentally mixed two wires up and connected a 12V power source to a 5V input pin on two motor controllers, and burned them out as a result. In addition, my raspberry pi got fried as well due to some unknown cause. This was most likely cause by a loose wire short circuiting the raspberry pi circuit board. Through the smoke and disappointment, I learned the importance of keeping wires organized, the hard way. From then on, I decided to label my wires. I have always seen labeling as a menial task but now I see its true importance.

Google Sketchup was difficult to learn at first, but after I got used to the digital tools provided, I quickly became an expert. In addition to Google Sketchup, I also had to familiarize myself with MatterControl. This software essentially links my computer to a 3D printer. I had to determine the right settings for the printer and learn how to import my Google Sketchup design into the software. For instance, each plastic had a different temperature and heat bed setting. If the settings are wrong, the resulting print would warp. I ran into this problem a couple of times when I was printing my wheels. The wheels were distorted beyond practicality; the edges were sharp and uneven. In another instance, I forgot to add support to one of my motor mounts, resulting in a puddle of black mess.

The warping of the 3D printed parts were the least of my worries. The wheels I designed in Sketchup refused to come out round. Instead, they consisted of multiple straight edges to give the appearance of roundness. In order to make the wheels more circular and have more tractions, I decided to wrap a thick rubber band around the perimeter of the wheel. STL files of the 3D printed parts can be found above in the Project Documentation.

For my starter project, I decided to make an electronic name tag that displays my name with LED light diodes. In this case, the name tag will display the name “VICO” since the breadboard is not long enough to display my entire name. This name tag consists of six main components: LED light diodes, power source, microcontroller, circuit board, resistor, and switch. The LED light diodes are soldered to the circuit board, spelling the name “VICO”. Then the power source, the switch, and the microcontroller are soldered into their designated positions. The name tag has four different functions. It can stay lit continuously, it can be lit from left to right repeatedly, it can start dim and then increase in brightness, and finally it can blink on and off.

Here is a link to the video of the starter project:

Here is a picture of the finished Name Tag: