Hi, my name is Ethan and I am a rising junior at Archbishop Riordan High School. Bluestamp came to my school to speak and I was fortunate to get pulled out of class to listen to them. I personally hate doing summer programs because I like to enjoy my summer doing my own things. Bluestamp was a different case. I want to be an engineer in the future and this was my chance to learn a thing or two about the field I want to join. My school does not offer many engineering courses and by not many I mean only one. I came into Bluestamp with zero experience and I was afraid that I was the only one without experience and had a fear that I will be unable to finish my project. My starter project was the Minty Boost, a charge for your cell phone. This project gave me knowledge of basic parts on a circuit board like resistor, capacitors, and diodes. My main project was the three jointed robotic arm. This project was more in my element because I like working with mechanical parts and tools. This project taught me more about how electrical components and mechanical components come together and work as one. From day one, I grew constantly each day and my blog goes into that in more depth. 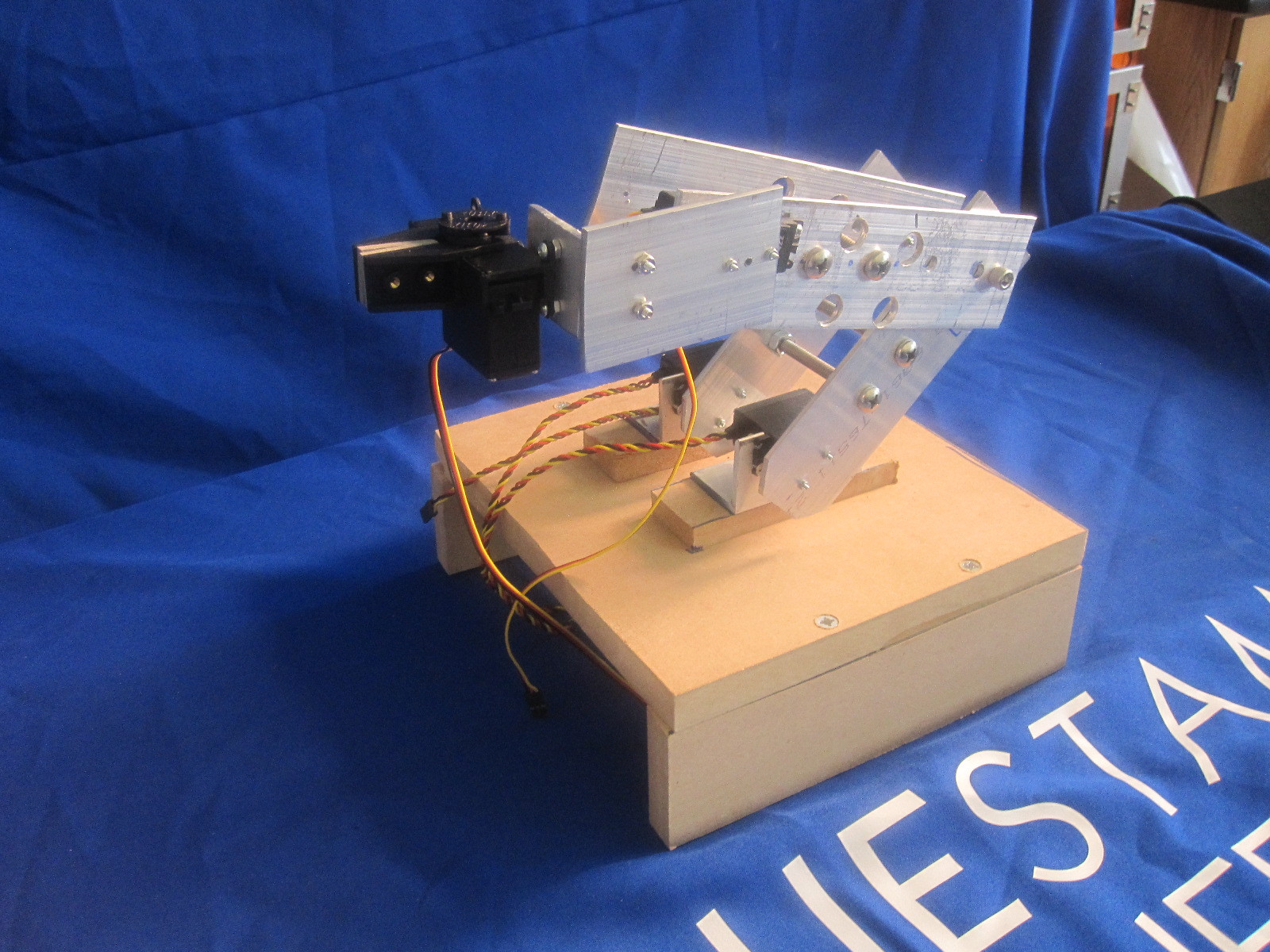 Here is the final video for my three jointed robotic arm. Since the last milestone I did, I completed the entire arm. However there were a few problems I ran into while working on the forearm. The forearm I created was based off looking a three dimensional drawing of the arm because there were no mechanical drawings for it. Therefore the forearm I created ended up to be too heavy for the servo to handle. What I did to fix this problem was I cut an inch off both sides and drilled four holes with the largest drill bit we had to try and lighten the weight load. This ended up working. I also only used one of the wrist joints I cut out of aluminum. This was a relief for me because both joints would have just added more weight to the servo and that would have created another problem. In the future, I plan to modify this project to try and reduce these problems. One modification would be to redo the entire design of the arm to try to make the whole thing lighter and to shift around the servos to make them more efficient. Another modification I would like to try would be to use stronger servos that can handle a greater rate. Working on this project, I personally like mechanical engineering over electrical. For me, I did not know enough about electrical engineering to be comfortable with it. Mechanical engineering is more in my element because I like working with tools and I get to be creative with whatever I am working on.

Second Milestone for the Robotic Arm

Since my first milestone, I became more confident in my project and everything began to fall into place. This milestone was delayed because I got caught up in finishing the project that I forgot about doing the documentations. From where I left off, all my electronic components are a hundred percent finished. I reprogramed my roboduino so the fifth servo could just connect to another pin rather than cutting the servo wires and soldering them together. I also received my two potentiometers that I ordered. Since I set up the wires, all I had to do was solder them. Along with the electrical parts, I started cutting out the aluminum parts. While cutting, I ran into problems. First problem was we did not have a jigsaw blade for metal. If I tried to use a wood blade I would just end up breaking the blade. The next problem I faced, was that there were parts in the mechanical drawings that I did not need. This led to me wasting time trying to cut out unnecessary parts. The third problem I faced was not every part in the three dimensional drawing was not given to me in a mechanical drawing. This meant that I did not have the measurements for some of the parts. I had to design these certain parts on my own, which lead to multiple educated guesses. I was able to cut out all the aluminum parts. Since I had the time, I designed a wood base that was nine and a half inches wide and four inches tall. The base did not take me too much time to make because the wood was way easier to cut than metal. the base I created was also not apart of the project so I just had fun creating one. After this I started constructing the bottom arm and connecting it to the wood base. My project is fairly done, but I ran out of quarter inch twenty hex nuts to secure the metal screws. This delayed me a lot today because I could not build anything more than the bottom arm. This might be my last milestone. The next step will be the final video where I will have my complete project fully functional.

First Milestone for the Robotic Arm

When I first saw the schematic for the robotic arm I was surprised how complex it was. This was a huge jump from my starter project. For the first few days I spent time researching how to read a schematic because I clearly did not know what I was working on. After I started researching all the parts in my Bill of Materials because I felt that I was missing parts. Then I found out I was looking at the wrong board and I did not have the right one. When I received the correct board the schematic started to more sense, especially when I started to search parts of the board on google. Seventy five percent of my schematic was just the roboduino board and the boxed items were the servos and the potentiometers. Once this was clear I started to program my board. This took me awhile because I did not have an integer verified. Once I fixed it the next problem I faced was my computer could not communicate with my board. I was stuck with this problem for three days until I tried to upload the codes on someone else’s computer. Luckily It worked and my board was finally programed. Then I ran into another problem. Two of the pins I programed were labeled PWM and for me these pins did not give off any electricity. This caused me to reprogram my board to give the servos new pins. I run into my coding problem again, so I had to use another computer again. After I got all my servos to respond. The next step was connecting the potentiometers. I got two out of four to work. One of them was broken and one I did not have so I had to order two more. For the next milestone, I plan to finish the potentiometers and to start cutting out my aluminum parts.

My starter project was the Minty Boost which was basically a portable charger for your cell phone. The Minty Boost was a fairly simple project to make. It required two ceramic capacitors which are non polar, two polarized capacitors, five resistors, an inductor, and one diode. In basic terms, capacitors are power storages that hold power for brief moments, resistors oppose the flow of electrical currents, inductors are electrical components which resist changes in electrical currents, and the diode controls energy to flow in only one direct. While building this project, pronblems I ran into was reading the schematic and understanding what everything meant and learning that the polarized parts had a specific way to be placed or your project will not work.