My name is Alex and I  am a senior at KIPP Denver Collegiate High School. My starter project was the Binary Blaster, and my main project is the  Magic box. One thing I like to do in my free time is play lacrosse because it is a good physical challenge that is fun an entertaining. 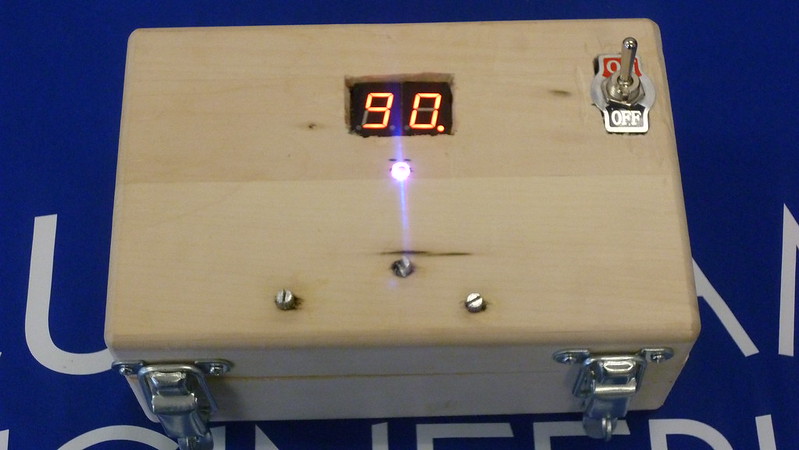 This last milestone was a good run. I got all my parts inside my box. I got the 7-Hex cut into the box with the LED. I also put the hings on the box to keep it closed. What I learned was to be creative because I didn’t have the right tool for the right job to cut out squares in my box. This experience was really great because it was my first time coding and it was a really great to learn how to read a line of code. I also was glad to learn how to make a circuit on my own because it was a complicated schismatic to understand. One major problem that I facing, was my shift register was not functioning correctly. It took me about a week and a half to get it working, by writing up a code that would push one byte of data through. From there on  I wrote the code that would get the shift register. The place I got this idea from was SCRT Information security (link posted below) that presented this at Insomni’hack 2011.

Resources for this project

Here is the Bill of Materials (BOM)

Code for the over all project

This milestone was a big one because I was able to breadboard all my components together to see if they will function correctly. I finished my last code, and wired everything together. My next step will be to solder everything together and put it into my box.

The 7-HEX LED was a true struggle because I was not able to get them to display a number. What I got done first was manipulate the LED to blink on and off, so I can see if the chip was taking in the correct data. Next,  what I did was was get one pin on the LED to light up and be able to push it through the LED so all the pins light up but only one at a time. Lastly, the code for the 7-HEX to count down was put on and it finally got it to count down!

What this project does is displays a number on an LCD with four buttons below the displayed number, and if you hit the corresponding buttons with the number displayed you pass the round. What is binary? Binary is the reading of zeros and ones, and adding them up. When a one is displayed it is a specific number and when  zero is displayed it is a placeholder that is just there. The numbers that correspond with the ones can be represented with 1,2,4,8,16,32,64,128,256,512,1024,2048,… etc. For example if we had 1101 that would be equal to 13 because you read binary to the left. The first 1 is equivalent to 1, and the zero is just a placeholder that represents zero; the second 1 is equivalent to 4 and  the last 1 is equivalent to 8. In the end what the addition will look like is 1+0+4+8=13. The main point of the Binary blast is to get past all 15 rounds in the least amount of time possible. some of the main parts to the Binary Blaster are the 7-segment display devices (LCD) because that is the main part that displays the number that needs to be pressed with the LED buttons.